You get on the bus. It’s just for show, the bus only takes you about 200 meters into Tel Hashomer Base; you and all the others enlisting with you can just as easily walk. But it means something to get on that bus, for your family to see you doing it. It’s the last time they’ll see you as a civilian. You’ll come home that night or the following week or month in uniform. A soldier. You look behind you and smile, then you take a seat. 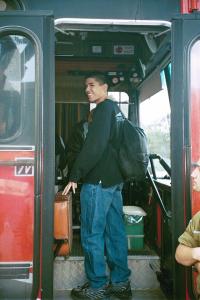 You come home that night and the uniform you have on is green and crisp and new. You look awkward wearing it. You’re not really a soldier, not yet, only by name. I look at this picture of you thirteen years later and there’s so much you don’t know, so much I want to tell you to make the following years easier for you. To put you more at ease. The truth is, I don’t remember you at that age anymore. I don’t remember what you were like. I don’t know how much of you was you back then, and how much of you was built over the following two or five or even eight years.

You’re going to have a hard time. You’re embarking on probably the hardest journey of your life. You might go through harder things later on, but you’ll be better prepared for them; better prepared than you were on March 14, 2002 for your military service.

I don’t want to tell you what’s going to happen to you. That’s not what this is for. In three days you’ll start a week-long physical and mental test to be accepted into the Shayetet unit, the Israeli Navy Seals. Your dream. You have doubts and you have fears, I know. You’re not sure if you’ll be able to get in, you’re not sure if you’ll even be able to finish the week. All you really want is to feel good about yourself at the end, to know you didn’t give up and that you gave it your all. You want your mom and dad to be proud of you, and you know they are, but still. You know this is a far-fetched dream but it’s within reach, and just as much as there’s a good chance you won’t make it, there’s a chance you will. Maybe you’ll pass the test, maybe you won’t. Maybe you’ll have other chances later on, maybe not. You might be a Seal, you might not be. But if you’re getting this letter from yourself 13 years in the future, at least you know you made it out of your military service in one piece, and that’s something too.

Your military service won’t come easy. I hate to say this, but there aren’t a lot of things, physically, that you’ll be good at. There won’t be something you’ll excel in. But what you have going for you is that you’re strong in mind. It’s easy to get through things when you’re good at them. The challenge is to keep pushing when you’re not. But you’ll see that commanders will appreciate tenacity more than physical strength and ability. Know that they see and notice you. People think more of you than you do of yourself. People think more of you than you know or give them or yourself credit for.

It’s okay to cry when you need to. It will help you.

You’re going to want to quit. Don’t make life and death decisions when you’re feeling suicidal. Never quit under pressure. Finish the day, the week, go home, think about it, reach a decision. It will take you more than ten years to learn this: quitting isn’t always a bad thing. Despite what the unit you end up in will drill into your mind day in and out, quitting isn’t always a bad thing. Sometimes it’s the right thing. Do what’s right for you, but don’t quit because it’s too hard. You’ll never forgive yourself.

Have more confidence. Do things with more confidence. People like and respect you and no one will ever be harder on you than you are on yourself. You’re going to achieve things you never imagined and you’ll do it with will and determination more than physical ability.

Remember that your commander isn’t God. He’s only a few years older than you and while he’s been through what you haven’t — he’s already done what you’ll struggle with — he doesn’t always have the right answer or good judgement. He’s a person like everyone else. He’ll have more control over your life than anyone else will ever have, but don’t let that confuse you. Don’t be afraid to stand up for yourself.

You’re standing in the entrance to your house and your mom’s taking a picture of you in your newly minted uniform and large kitbag full of gear by your feet. Your hands hang by 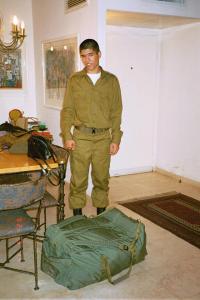 your side and your eyes are almost shut as you attempt a smile. It’s Thursday night and you only have a little more than two days before you report to the Navy Seals base Sunday morning and get your chance to make your dream come true. I look at that picture of you and I want to hug you because you’re so young and innocent and ideological. You’re so scared. Not so much of failing, but rather scared of the hardship of the week to come. Scared to be tested in situations that will prove too hard, and maybe more than failing, you’re afraid to quit. Afraid to be brought to the edge and give up. Scared you’re not as strong as you think you are. That fear will remain with you for a very long time. It will take more than a decade for you to realize that you’re stronger than you think, a better person than you know. Remember to forgive yourself.

There’s so much you don’t know and so much I want to tell you to put your mind at ease. But I can’t. I can only tell you that no matter what happens, everything will be okay. In thirteen years you’ll realize it’s March 14, 2015, you’ll look at your pictures from the day you enlisted, you’ll see yourself standing awkwardly in uniform for the first time, and you will write this letter, telling yourself that no matter what happens, everything will be okay, and that most importantly, there are beautiful people in your life who love you no matter what you do, no matter whether you succeed or fail.

Congratulations on your enlistment. Good luck.